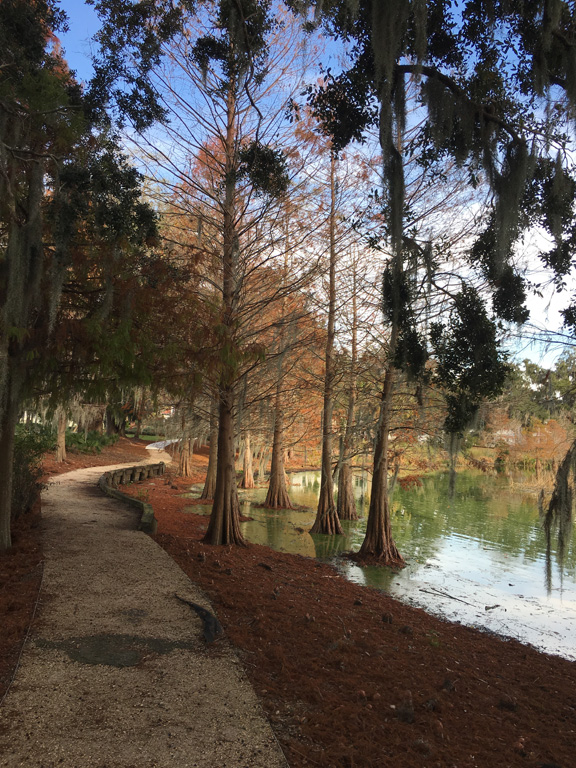 When the large water pumps are active, the alligators hear dinner bells.  Once used for irrigation the pumps would naturally suck up fish, and eject them into Lake Apopka.  The pumps are no longer in operation, but the gators still frequent the fish taco bar.  It was getting dusk as we rode our bikes from Lake Apopka back to the rig.  Keeping a steady peddle along the shoreline we saw no fewer than eight gators minding their own business. It must have been dinnertime. Several were lying just off the trail.  Gators that slumped into the water did not bother us, but the two large gators that held their ground, dispensed concern.

The West Orange trail is a wonderful 20-mile paved bike trail.  From Magnolia campground, one of the Apopka county campgrounds we made our way to the towns of Apopka, Winter Garden, and Oakland.  In the days of yesteryear Winter Garden was a place to grow produce for the frozen north during wintertime.  Winter Garden, get it?

Grace Park in Oakland offers a great place to sit and relax by the West Orange Trail, but the park’s namesake was definitely not one for calm and quiet.  Grace Mather-Smith hit the little town like “a social bombshell” when she arrived in the early 1900s.  Ms. Grace was a generous supporter of Oakland’s African American churches.  The 1937 portrait featured in this post was displayed in one of those churches.